Claim Chronicles of the Mishap Family – The Ring 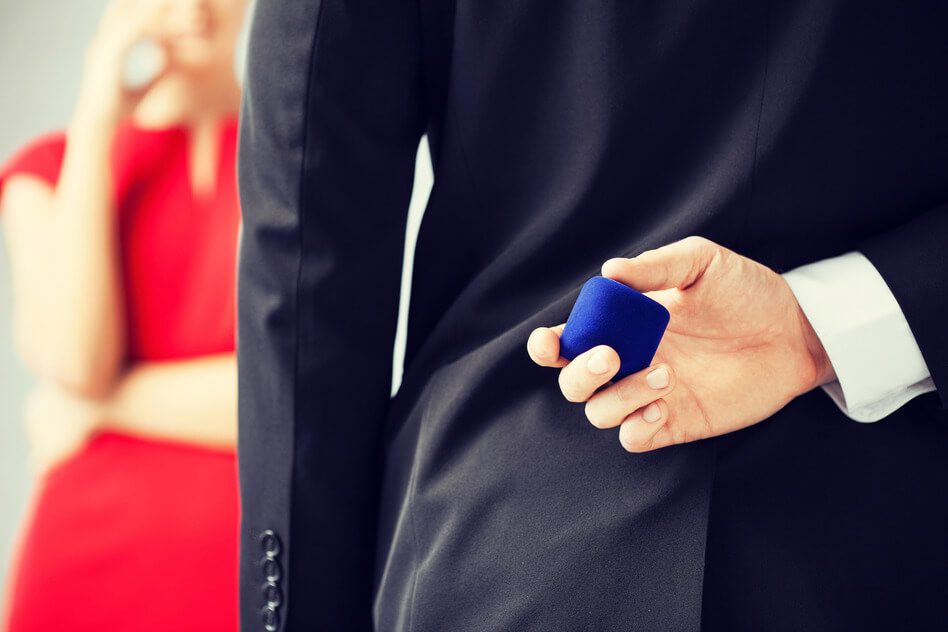 Larry and Cathy knew they were meant for each other right from the start. They met in college, when Cathy dropped her books walking through the university’s library and Larry tripped over her bulky macroeconomics text. The pair became inseparable, dropping things and tripping over each other ever since.

Larry wanted to surprise Cathy with something special for the 30th anniversary of their first date. He found a beautiful ring in an antique jewelry shop. The ring was lavish, but no expense was too great for Larry’s one and only true love.

The jeweler placed the ring into a fancy box, which she then placed into a small bag so Larry could present it to Cathy that evening. Larry was taken with the ring. He couldn’t stop staring at it, so when he left the store, he opened up the package right there on the street to give it one more glance.

Amid the hustle and bustle of the busy shopping district, Larry fumbled with the ring while putting it back into the box. It danced out of his grasp and, after a few near-catches, bounced across the sidewalk and into a sewer grate.

He had just thrown ten thousand dollars down the drain. Literally.

Larry was stunned. He tried in vain to recover the ring, but he couldn’t even see it in the dark muck below. There was nothing left to do except the one thing he always did. He called his insurance agent, Annabelle.

“Larry, I don’t know what I’m going to do with you!” Annabelle said, after hearing his story. “This sort of thing would only happen to you!”

Because she knew the Mishaps so well after years of dealing with their various calamities, Annabelle had prepared for just this type of incident. Well, maybe not this exactly, but she knew if anyone would need to make sure their newly acquired possessions were covered immediately, it was Larry!

While searching for the best homeowner’s insurance policy for the Mishaps, Annabelle sought a policy that would provide coverage for valuable items at the time of purchase, so long as at least one other item was scheduled on the policy. All new items would need to be scheduled within 30 days of purchase, but there would still be coverage within the first 30 days, just in case.

Annabelle knew the Mishaps were exactly the case for which this type of policy provision was designed. Because Larry and Cathy had scheduled a few other valuable items already, some art and some jewelry, their policy was able to pay up to 25% of the total value of all scheduled items and enough to cover the cost of the new ring. This was not common in all homeowner’s policies, but Annabelle knew to always expect the worst with the Mishaps!

If Larry and Cathy had an off-the-shelf insurance policy, most likely Larry would have been out of luck. Some policies have a minimal limit for unscheduled jewelry and the deductible would apply. Others might only cover if the piece of jewelry was stolen, not lost by the owner. Because Larry’s agent understood his unique needs and circumstances (specifically that he was a Mishap!), Larry was able to purchase an insurance policy that would cover even the wackiest of situations.

With the check from the insurance company, Larry was able to purchase a new ring for his anniversary with Cathy. It wasn’t the same as the original one, but it was just as beautiful.